A few weeks back I dropped a post on my Facebook account.  In the post I shared a glimpse of my struggle since entering into pastoral ministry.  While it has been a struggle and do not get me wrong, it has been both incredibly exhausting and frustration, it has been an incredible journey for this small town West Virginia boy as well.  In mentioning the struggles I have endured, I also mentioned how clergy are just regular people with struggles, with injuries, but are hopefully pressing on.

Here is what I wrote: 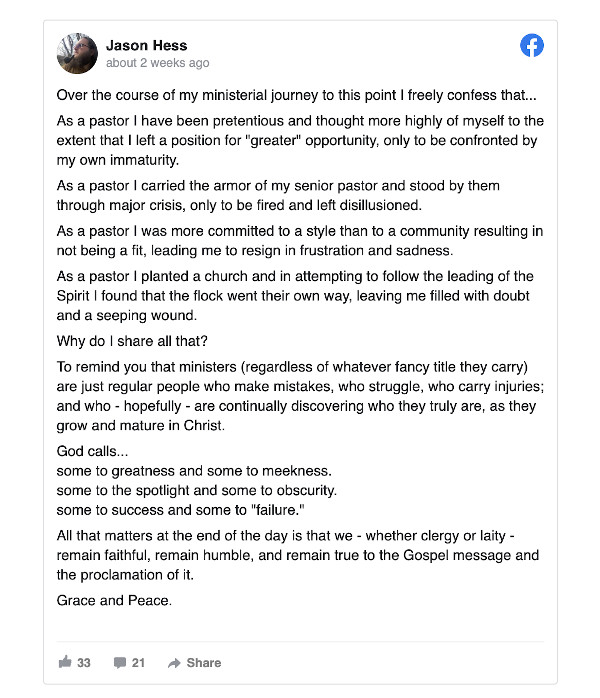 I could not help but reflect on how fellow clergy understand the struggle, they get the struggle, they feel the struggle.  It is all too real for them.  Whereas those who are not clergy, read the post through an entirely different lens and sought to encourage me to press on.  (I truly appreciate those comments, even if I was not seeking them out.)  As I have further thought on my Facebook post and the responses it generated, it makes me consider the idea of a general, albeit, justifiable lack of imagination those outside the context of ministry possess.  Now hear me out, when I say a ” lack of imagination” that is not meant as a slight against one’s ability to harness their creative mind.  What I am addressing is the reality of not being able to imagine something if you are not part of it.  It is easy to tell someone to go and “walk a mile in someone else’s shoes.”  However, unless they literally did it can that person truly understand?  For instance, I cannot imagine what pregnancy feels like and what delivery is like.  Obviously my wife can, she experienced it.  Three times!  Despite that I lack an imagination for that facet of life.

As I continued to ponder the post and the responses, my mind went to those ministers who have either suffered a moral failing or simply walked away from the faith.  Made me consider how many folks become uncomfortable with transparency and vulnerability and do not know what to do with it, especially if it is coming from someone they recognize as a leader.  There is various reasons for that, of course.  I understand that.  Nonetheless, it made me think down a rabbit trail (which is normal)… is it possible that in cultivating a culture that sees the leader as professional (un)paid holy man, and in continuing to feed that lie, the Church has inadvertently transformed from a safe space to a hostile space when it comes to clergy transparency?  After all, if the minister has to consider his paycheck it is safe to say it is not a safe space.

Regardless, in creating a culture on the local level that is not conducive to unveiled transparency from the clergy, and a willingness to embrace brokenness and weakness from the congregation, we fail to engage in mutual healing and support.  Is it possible that many moral failings are tied to the lack of safe space in the local community of faith.  Meaning clergy do not feeling safe to be real, and the congregation is uneasy with true transparency and vulnerability?  So what ends up being exuded from the minister isn’t realness, but fake-ness (fake smiles, fake joy, etc)?  Which ultimately leads to folks seeing through that and questioning the genuineness of their clergy, and leads to clergy seeking out improper things as bandaids to their pain.  Resulting in moral failings and or a loss of faith.

All that said, I believe that in order for the Church to grow into her fullness as the bride of Christ it is incumbent upon us – clergy and laity – to: (1) not hide our weaknesses and our struggles by being transparent and vulnerable, and (2) overcome our discomfort when the veil is pulled back on someone’s life and see the moment for what it really is… a glimpse of true naked humanity restored, where darkness does not reign.  We must be willing to grab hold of the darkness we all carry and drag it into the light.  Not only to redeem our yesterdays and save our todays, but to also free our tomorrows.  I get folks want privacy, and I understand that folks fear the consequence of exposing their mistakes, their struggles, their injuries, but real healing is found in owning that stuff and continuing to grow and mature in Christ.

Back in April 2021 when Myra and I got vulnerable and transparent about The Storm, our 2013 marital/family crisis, on Ps. Josh Evan’s podcast, I’m F*cked Up, we were unsure of what the fallout would be.  Not because we have not shared our story before, but because we never shared it so broadly.  To our surprise we received both directly and through Evans all sorts of positive feedback saying how much it touched and blessed folks.  (If interested in listening to it you can find it on Apple Podcasts or Spotify, and if you need a disclaimer: Explicit Language.)

Scripture reminds us of the time the Lord told the apostle Paul, “My grace is all you need. My power works best in weakness.”  It’s time we stop simply reading that passage as a warm blanket and instead see it as a charge to embrace our weakness, because weakness is strength.

All that matters at the end of the day is that we – whether clergy or laity – remain faithful, remain humble, remain true to the Gospel message and the proclamation of it as you strive to walk in authenticity, and accept the authenticity of others, even when it hurts.

During this past year, I’ve been on a journey to essentially rediscover myself. To be the person that I am supposed to be. I’m not speaking about being a priest or pastor, or even a husband or father. I’m talking about being authentically...

Defenders of Altron will include aliens, classes, creatures, and adventures!

"Above all, trust in the slow work of God." - Pierre Teilhard de Chardin, SJ

The views and opinions expressed on this site are those of Jason A. Hess, and not necessarily those of the CEEC / DOR, or any local church / event where he may minister.